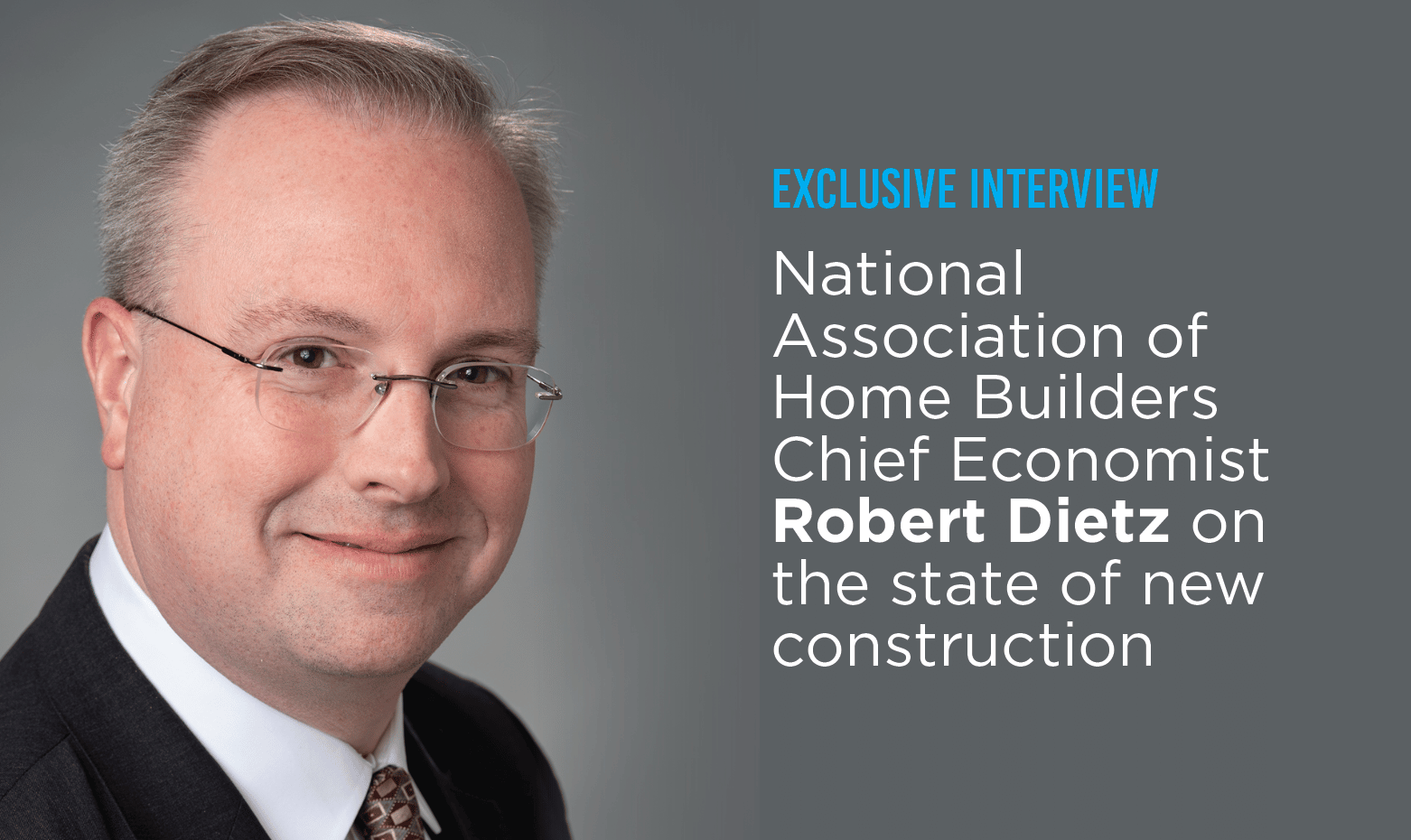 The decline in mortgage rates could help bring confidence to the homebuilding industry and result in more shovels in the ground starting over the next couple of years, according to our exclusive interview with Robert Dietz, chief economist for the National Association of Home Builders.

Dietz shared with us his take on the current state of the new-home market, what’s holding back builders and what’s needed to move forward. It’s a complex problem without a simple solution, but easing regulations and training more skilled laborers to bring these developments to market could go a long way to help move the industry forward.

Dietz said a number of actions can be taken to address the housing shortage, but he added that different solutions are needed to address the short-term versus long-term deficits.

High interest rates and the lingering impact of high construction costs during the post-COVID housing boom are the primary causes of the short-term housing crunch, Dietz explained. “This inventory will ultimately be absorbed when the Fed eases monetary policy and mortgage rates fall back,” he said. “This likely will occur on a sustainable basis in 2024.”

The structural housing shortage is more complex, and though a number of estimates exist on just how long-term the deficit is, Dietz and the NAHB economics teams estimate the nation is short about a million homes.

“The primary reason for this long-term deficit is underbuilding between 2014 and 2019, particularly for single-family housing. And the deficit is most acute for entry-level housing appropriate for first-time and first-generation homebuyers,” he said.

The solution: addressing the supply-side issues at the root of the problem. “I refer to these challenges as the 5 L’s. It is lack of labor, land/lots, lumber/materials, lending for builders and land developers and ever-costly legal/regulatory costs,” he said.

In order to ease the housing shortage, which NAHB economists believe will take place between 2024 and 2030, officials need to “reduce, eliminate or reform costly land and housing construction rules, including inefficient zoning policies; recruit, train and retain skilled workers in residential construction; maintain access to credit for builders; and improve our building material supply-chain, including obtaining a new softwood lumber agreement with Canada,” according to Dietz.

No single-bullet solution exists, so making progress on closing the housing gap will require lawmakers to take action on a number of fronts, Dietz said. “For example, simply improving zoning rules for housing won’t solve a local market’s inventory challenges if the construction workers or developer financing is not available. And 2020 and 2021 showed what can happen to housing costs if there is not enough lumber to build new homes,” he said.

The challenges of building these days are particularly high for entry-level homes, largely because fixed costs, such as lot-development costs or fees, can make them financially unfeasible, according to Dietz.

“So, as these regulatory costs increased after the Great Recession, the entry-level market was significantly reduced,” he said, noting that in 1999, 37% of newly built single-family homes were under 1,800 square feet. That percentage dropped to 24% by 2021.

Eliminating exclusionary zoning rules, such as minimum lot sizes and setback requirements, would help relieve some of the pressure on builders, he said. “Let the market determine lot size. Enable more town house construction for medium-density development,” Dietz added. “With improvements in these areas, we should see additional entry-level construction during the 2024 through 2030 period.”

Having said that, Dietz noted that “not all regulations are bad.” But they hinder the industry’s ability to close the housing shortage gap. “I think almost every housing economist, liberal or conservative, would agree that there are a lot of rules in place that harm housing affordability. Prior NAHB research has shown that about a quarter of a typical single-family home’s sale price is due to regulatory costs, and in particular, land development costs.”

Dietz said about a third of the cost of building an apartment building in today’s market is due to regulations. “Harvard economist Ed Glaeser has argued that these kinds of costs are the largest impediment to the U.S. economy. Finding the right balance is a job for the political system, but I think it is clear that housing development is overly regulated and costly in most local markets.

“If you care about the inventory crisis,” he added, “you must make your voice heard on reducing regulatory costs associated with home building and land development.

It’s not just regulations and interest rates that are holding back the new-home construction business. About 400,000 construction industry jobs are unfilled. The biggest need is for carpenters and framers, according to Dietz. “But just about all the trades lack skilled individuals to fill jobs,” he said. “More than 75% of homebuilders report a lack of framers, carpenters, plumbers, masons, concrete workers and electricians. These are in-demand jobs that pay above median wages.”

The industry needs to do a better job of recruiting and retaining these skilled laborers, he said. “Organizations like the Home Builders Institute are doing just that in many local markets. In fact, I estimate that due to a growing number of retirements, we need to bring on about 740,000 construction workers a year,” he said.

Dietz added that homebuilding and housing are both “significant and important parts of the U.S. economy” and as of the third quarter of 2022, made up 16.1% of the gross-domestic product. Dietz added that residential fixed investment (RFI), which is a more cyclical home building and remodeling component, made up 4.3% of GDP.

“The economic impact means housing is a significant job creator. In fact, for every single-family home built, enough economic activity is generated to sustain three full-time jobs for a year, per NAHB research. For every apartment, it is one job. And one job for every $100,000 in remodeling spending,” he said.

America’s Most Trusted® study: Which homebuilders topped the list for 2023?

New-home construction slides in November as builders pull back